The Global Peacebuilding Center was conceived prior to USIP’s move near the National Mall in March 2011. Around 2008, staff, primarily from the education program, started meeting to consider strategies that might be developed once the Institute occupied its new more visible and public headquarters. Early on one idea that was advanced was a center that would take the form of an interactive museum, much like how the U.S. Diplomacy Center of the State Department is planned.  Tara Sonenshine, who was executive vice president, spearheaded the initiative. I was fortunate to work closely with her to consider what a center might look like.   In the beginning we used “public education center” or PEC to describe the concept. But in late 2009, Global Peacebuilding Center or GPC was decided as the name of the effort.

Subsequently Ann-Louise Colgan was appointed the first director of the GPC before USIP moved. The official launching of the GPC took place after arriving at the new location and coincided with the publication of the Peacebuilding Toolkit for Educators, edited by Alison Milofsky, now director of curriculum and training design at USIP.

The GPC website provided a distinctive gateway to resources for educators and students.   Major features, besides the toolkit, included the Witnesses to Peacebuilding videos, which were often integrated as part of student visits, and the Conflict Styles Assessment, based on the Thomas-Kilmann Conflict Mode Instrument or TKI.

In an email to educators in late January, Colgan stated that one of the reasons to make the move was to “make it easier for you to find and use broader USIP resources.”   I agree that this was at times a shortcoming of a separate GPC website. However, the GPC website provided direct access to teaching and learning materials, and a youth vibe that was important for engaging young people and teachers. 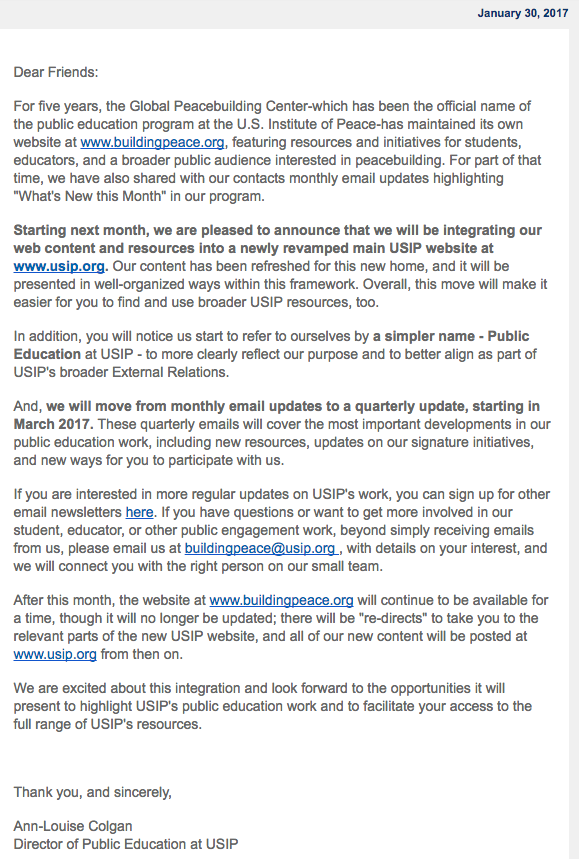 Now if you go to http://www.buildingpeace.org you will be redirected to the new site. However, if you are starting with a specific GPC link, say, http://www.buildingpeace.org/act-build-peace/learn/conflict-styles, which was the address for the Conflict Styles Assessment, you will now go to a page that states “Page Not Found: The page or file you are looking for has either been moved, deleted or does not exist.”   This is unfortunate, in that many educators have embedded GPC links in their materials and syllabi. You will need to search the USIP website for “conflict styles” to find the assessment tool.  I got the same “page not found” when I used the old GPC link for the toolkit. Likely, there are some direct links, but these two are very popular. In addition, when I clicked on a link that stated “Learn more about USIP’s resources for students and educators” I ended up at  “page not found.”

In addition, the new site as part of the primary USIP site now has a more think tank, “wonkish” look to it. Gone is the colorful main page containing multiple links that would take visitors to various resources including a side bar with the words think, act, teach, train, which linked to relevant resources.

The relationship between USIP and the education community has been a fickle one.   For teachers and college faculty who focus on global education and conflict-related themes, USIP has been an important source of training and grants. But to the more focused peace education community, USIP has been at times criticized for its failure to challenge government policy (even though USIP’s congressional mandate prevents it from doing so) and questioned its connections to the military, and at times, what appears to some as an acceptance of violent approaches. While at USIP, my outreach work often involved attending meetings and gatherings of peace educators and activists. In those settings, USIP was often looked upon with suspicion.   Continuing to make USIP resources easily available seems an important goal in building bridges.

My hope is that the new incarnation of the peacebuilding education efforts at USIP is a success.   Better integration with overall USIP materials and offerings can improve the work of teachers in the classroom.   My fear though is that some will be frustrated in attempting to navigate the new public education site.